At Home with Nature: so many differences, so much in common

Pagrindinis > Projektai > "At Home with nature" > At Home with Nature: so many differences, so much in common

Ecological living style is becoming more and more popular and not only popular but also essential thing if we want to save our planet and be healthy and in harmony with nature. Besides of recycling and buying just ecological and natural things in stores, there is one more thing, we should do. To come back to ecological building and gardening. It is not even saving our planet but is on the other hand way cheaper to live like this.

There are some solutions. There is no better thing than planting your own fruit and vegetable and being able to pick fresh tomato, knowing how did it grow, that no chemicals and fertilisers were used. Even it is not always possible, as we live in big cities and apartments and not everyone can manage to have its own private garden, but there is an option – urban gardening.  Another important detail for coming back to ecological living style – eco architecture, eco building. For many many years our ancestors were living closer to nature in all the ways, using natural materials for building houses. Lets come back to these traditional types of architecture and try to see, what can we use nowadays.

Lithuanian association „Green.Lt“ with two partner organisations „ Oltu Halk Egitimi Merkezi Mudurlugu“  from Turkey and  „Egyutthato Egyesule“  from Hungary has started a project, called „At home with nature“ and during the first fase we’ve gathered information about eco-gardening and eco-building in these countries. Lets talk first talk about Turkey.

Traditional Turkish house is a style of housing that is formed and continued for around 500 years in Rumelia and Anatolia regions within the borders of Ottoman Empire and evident with its own properties. Turkish houses had immense developments within this period and generated different styles in the regions they spreaded out where the climate, nature and culture show differences.  The respect of Traditional Turkish houses for mankind, nature and the environment within is accepted as one of its basic configuration principles.

Regional properties that depend on climate, geographical factors, lifestyle and construction material revealed various plan types. There are few types of tipical traditional ecological building in Turkey and the most popular are adobe houses, wooden houses and stone houses. 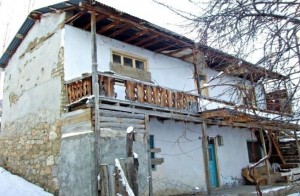 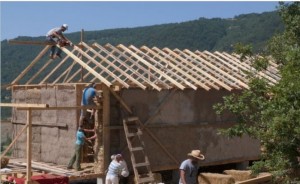 The building of  Adobe houses may be commonly seen in places where precipitation is low and drought is high. This kind of houses can be observed in Southeastern Anatolia and Central Anatolia Regions.  In general the main materials used for adobe house are hay, clay, water and wood.  And the principle of building this kind of of house is kind of simple, in the beggning the clay is mixed with hay and water, after this “mud” is compressed into molds, and left to dry in the sun. After some time when it’s already dry, you  can star building the construction from the molds and strenghening it with wooden beams. For finishing this type of house and giving a pretty and tidy image you usually whitewash the walls. In general building adobe house takes one to two months.

In places where there is a lot of humid forests, trees are used as construction materials.  Wooden houses may be found in Black Sea Region. After preparing ground and concrete floor  all the construction is made of wooden poles, that makes the frame and after again the walls are being constructed out of wood. This type of building is simple, econimical and requires one to one and a half months to be finished. 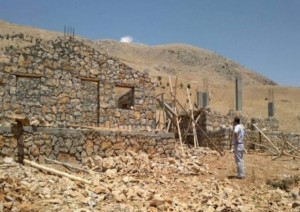 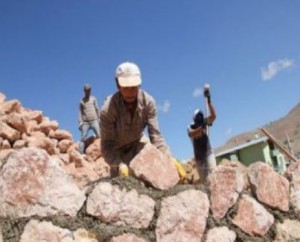 One more type of traditional Turkish building is stone houses. Stone houses were and are being built in Eastern Anatolia, where the winters are cold and summers too hot, stones preserve heat insade and cool temperature during the summer.  Construction is made by stones being attached with each other with cement or mud/clay. Wooden balks are used to support the stone walls   and make the structure stronger, especially because of the danger of an earchquake. It is known that the usage of wooden balks in stone walls as a supportive unit is a method applied for 2500 years. 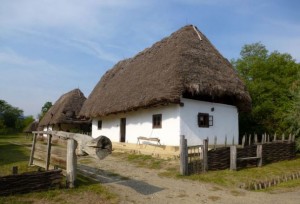 Coming to Hungary we have a different example of building, but not as different as it might seem, because even we are talking about quite big distances between each country and different climates, sounds that building traditions are quite similar, anyway, besides similar way of working, the exterior is quite different.  The main, most traditional and popular building type whole Hungary is Straw house. The straw house is a building with a wooden frame and between each two wooden posts is filled with bales made from clay and straw, more or less the same like adobe house in Turkey.  After building the construction, the building is whitewashed. 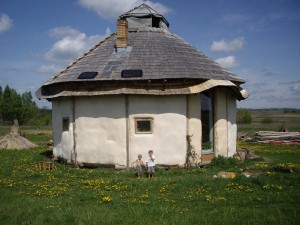 Talking about Lithuania, its cold and long winters demand us to have warm and stable houses, but anyway, we cannot see so much diversity talking about architectural styles in different regions as Lithuania is small, and climate in all the country is similar.  After comparing information, it seems, that wood, straw and clay are the main traditional materials used in all countries. In Lithuania the first thing we find again is straw house, though in this case, traditional building materials get absolutely modern shape. Besides having more or less same principles of building, preparing ground, wooden construction and filling it with blocks of compressed straw or hay and clay mixture dried into blocks we can both get or very traditionally or a modern looking house. 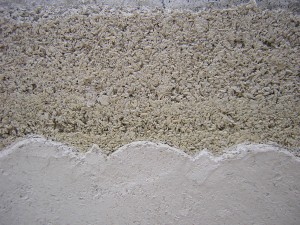 But here we have something, that makes difference – hemp houses, that are becoming more and more popular in Lithuania. Hemp grows fast, one hectare of cannabis produces material for a house of 160 square metres. Fascinating? Hemp concrete is made from cannabis and clay or whiting mixture. And this concrete after is used to make construction. By the way, hemp concrete has a very high thermal resistance.

So in general, it looks that materials can be found in all countries and the way of using them is quite similar, the only difference is architectural style and design, that was affected by old traditions. Lets try to build?

All the examples were collected during Erasmus+ strategic partnership project “At home with nature”. The project is funded by the European Commission. This article reflects the views only of the author, and the Commission cannot be held responsible for any use which may be made of the information contained therein.